Breakfast was left overs, which sounds pretty second rate, except when the leftovers are apple pie and custard. Also had some porridge. In previous years our oats have been from Lightwood farm in Bullarto (105kms) near Daylesford, however we now buy from NSM, a bulk dry goods store in Brunswick. Here we can make sure there’s no  excess packaging –  a great place to get lollies straight from the barrel!

I discovered with a phone call that our oats are from Laucke one of the only Australian family owned and operated independent millers now left, as corporate giants like GrainCorp, CBH and Viterra now dominate the industry.  Laucke have mills in Strathalbyn, South Australia (689kms) and Bridgewater on Loddon, Victoria (179kms).

Also there was our apples, and an essential coffee for Janet – this time Great Divide coffee, roasted in the Stevenson River valley, Marysville, the place where Janet grew up (102kms). The blend is a mix of Sumatran, Papua New Guinea and South American beans (?,000kms). 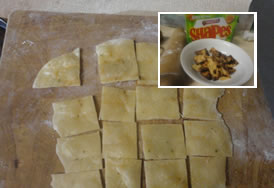 Flat bread under the griller worked such a treat, I thought I’d try my own version of ‘Shapes’. These worked well. This time I used chicken stock as flavour to spinkle on top. It’s from GFresh, based in Ridleyton, South Australia (726kms), ‘Packed in Australia’, and ‘Made in Australia from Import and Local ingredients’ (This means there’s more imported components than local).  …sorry about the little pic, my camera wiped off the larger image. 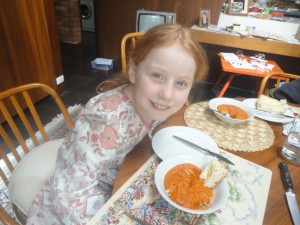 Lunch. I took the kids to the grandparents for school holidays, so we had lunch there which is going to throw up some wild cards.

I did bring along some spelt pasta, which is from Powlett Hill Biodynamic farm in Campbelltown (152kms).  My mother had made some very tasty soup which turned out to be a simple mix of healthy carrots, pumpkin, onion and lentils. All of unknown origin, but you’d think they were grown pretty close to us, relatively speaking.

Dinner. Nick and Janet are off to the movies as the kids are gone. Wow! So it’s left overs of lamb and veggies. Can’t complain there!

Home again. We normally have a warm drink before bed. Often it’s Oxfam drinking chocolate which is a great choice because it’s Fairtrade certified, so there’s an assurance of no labour exploitation (child labour is common in the cocoa growing growing regions of West Africa). We know however that cocoa comes from way around the world (70% from West Africa).

sourced from – at least which particular communities they are supporting – but no, best we get is ‘Made in Australia from imported and local ingredients’.

There’s some links from this page about the ‘Kuapa Kokoo cooperative in Ghana’ and ‘a Sustainable Supply chain’, but nothing that’s Australian specific. Oxfam is in the same situation as all companies involved in international trade – you end up being very general with the information you give, so you can cover all your markets. This however doesn’t really give the level of transparency I’m looking for, or really assist with accountability.