We’ve always been keen to bake our own bread, but have had some mixed results. –  though they have become less ‘brick-like’ lately. Yesterday was very exciting, as I learned that ‘flat bread’ is an adventure for the simple man – that’s me. 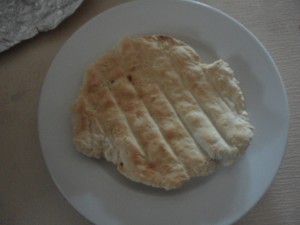 I asked our friend Kim if she had ever made flat bread, and she said it was just a matter of mixing flour and water, with some oil and salt, together into a dough, rolling it out, and then grilling it. Well we went to use our griller about 10 years back, when we first moved into this house and it was in such a frightful state (ie. disgusting) that we left it well alone. Haven’t used it since. Until yesterday. I cleaned it up and put it to work on my flat bread! Hey presto, this things works a treat.

Yesterday we did the rather successful initial trial. This morning it morphed into a sweet version – “sultana biscuit”, using Robinvale sultanas (472 kms) and our honey. Accompanied by our homemade yoghurt (milk from Nathalia -233kms, culture from Cheeselinks in Little River – 42kms); and sunflower seeds from 4 Leaf (ACO organic accredited from Tarlee South in South Australia (773kms).

We’ve been happily in honey from our bees all year. I talked about our bees in last year’s blog, but worth mentioning we’ve had a pretty good season this last while. We gratefully harvested over 25kg from 2 hives on our shed roof in the pre-summer season. We were able to supply this to our local dry goods coop. 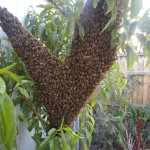 It’s been a journey of learning too. We had them swarm at least three times. That’s when half the hive leaves to look for another home with the old queen. You get about 24 hours after they swam when they temporarily relocate to a tree close by. 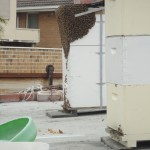 So we found ourselves frantically building another bee box to grab the swam, and then took it up to Buxton where Janet’s folks are. When the other hive swarmed again later on, I was able to successfully integrate the new swarm into the hive that had previously swarmed, which I wasn’t exactly sure could be done. All good, and looks like another good harvest time coming up pre-winter.

So, back to the “G’riller’ biscuits (alias for flat bread). By lunchtime the kids were churning them out. They love a messy hands project. I added my ‘Daddy eggs’ which are just poached eggs (in boiling water with splash vinegar, get a whirlpool going, egg in, 2 mins, soft centre).

We also added tomato, cucumber and, dare I say it, that ridiculous cheese from New Zealand again. Must have come out when I wasn’t watching. The kids love it. Another 2,400 kms…

Dinner was the most amazing meal I have had. My wife is a guru of making food-to-die for. This is coming from simple-ned (me), yet even master-chef gourmet-George would rave-on tonight. 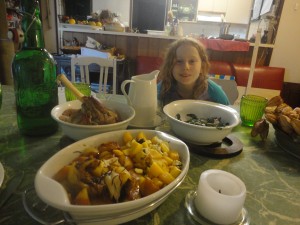 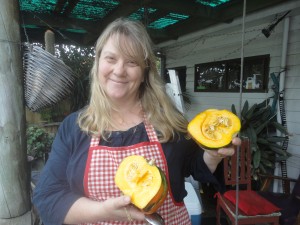 >> Silverbeet from our garden with onion, from Nature’s Haven Organics, Coleambally (461kms). Getting used to silverbeet, which  pops up everywhere here could be our means of surviving any food crisis that the future may toss at us (great radio interview on food security here).

>> And finally Janet’s Scrumptious Apple pie with apples from Owen and Maree’s property at Cudgee, near Warnambool (241kms), and our frontyard rhubarb (Okms). I’m really, REALLY, enjoying this week. 🙂