Follow the journey of a tomato through the industrial food system to the supermarket shelves. Find out why local food alternatives are a good thing, and how easy it can be to find good food close to you.  More about the facts behind the video below.

To you and me, good food is the basis for a healthy life. But we live in an era of convenience. And when we demand convenience, something happens to our food.

Look at the tomato sitting on the shelf there. It looks fresh and healthy. But truth be told, that is one tired, worn-out little tomato. Because the system that rushes to get this guy to the shelf is, well, complicated.

The great journey begins a long way away – before the tomato is even grown.

Barrels and barrels of oil come from all over the world to help produce this tomato.

‘The industrialisation of our food supply means that our current production is extremely oil intensive. It has been calculated that, on average, it takes ten calories of fossil fuels to produce one calorie of food in our current setup. Some food has an even more ridiculous ratio – like corn-fed feedlot beef which consumes about 55 fossil fuel calories to one calorie of meat. We are effectively eating oil. ‘ – 2010 Food Crisis for Dummies

The oil is needed for packing and shipping. And it’s also used to fertilise the soil.

‘Conventional food and farming today rely on the use of nitrogen fertiliser. Today, one third of the energy consumed in agriculture goes for nitrogen fertilizer.  The manufacture of one tonne of fertiliser produces seven tonnes of nitrous oxide, a greenhouse gas with a global warming potential 296 times greater than carbon dioxide.’ (source)

The tomato is then subjected to regular fungicide sprays while it grows.

Then when it’s still green and crunchy, it’s picked from the plant, to prolong it’s life on the shelf. Later it will be sprayed with ethylene to make sure it goes red.

‘….tomatoes are often picked green to make them easier to transport. Then, before sale, they’re placed in ripening rooms where they are exposed to ethylene gas. This imitates some of the changes that occur during ripening but, because the sugars and flavour compounds that make tomatoes taste good come only from the vine, they don’t develop their full flavour’.  (Choice report)

The farmer knows this is not ideal, but he has no choice – he has a contract with the supermarket, and that puts him in a big rush. It’s not a great contract either. When that tomato is sold, the farmer will get as little as 14 cents to the dollar. The middlemen will get the rest.

‘(The NSW Farmers Association) research revealed that farmers were being paid about 40¢ a kilogram for grey pumpkins, which were then being sold on supermarket shelves for as much as $2.78 a kilogram. It was a similar story for tomatoes and carrots.’  (Sydney Morning Herald)’At the supplier end of the grocery cycle, the National Farmers’ Federation estimates that Australian farmers get as little as five percent of the retail price of fruit and vegetables. Meanwhile Australia’s grocery prices have risen over 40 percent in a decade – well above the OECD average for developed nations. ‘ (Fairchoice)

The tomato then gets thrown into a truck to travel vast distances.

‘About 75% of Australian tomatoes are produced in Queensland, where they grow year round. In summer they’re also produced in NSW and Victoria. Western Australia is self-sufficient, relying on winter tomatoes from Geraldton and Carnarvon and summer ones from the Perth area. So, depending on where you live, tomatoes can be well-travelled by the time you eat them.’  (Choice) ‘The CERES report on food miles in Australia estimates that the average distance travelled for a tomato = 1,618.37km. This estimate assumes that Melbourne’s tomato sources vary seasonally. During summer most  tomatoes come from within Victoria, but during winter as far as Queensland or WA, or we import hydroponically grown tomatoes from New Zealand. (To ensure a conservative figure, the estimate disregarded the tomatoes imported from New Zealand).’  (Food Miles in Australia)

It then sits in cold storage, where it gradually loses some of its nutritional value.

‘Not surprisingly, it can take 10 days or longer from when tomatoes are picked to when they arrive at your supermarket — and they can be there a few days more before you actually buy and eat them. All this time they’re losing flavour.  (Choice) ‘Refrigeration is the enemy of the tomato as it nullifies flavor and turns the flesh mealy. The culprit is a compound called Z-3 hexenel, which accounts for the tomato’s scent and taste. The development process which turns tomato’s linolenic acid to the Z-3 that makes our mouth and nose sing is hindered by cold.’  (source)

Finally, weeks after it has been picked, the tomato is put on display.  Shiny, red … lifeless.

In an era of convenience, a lot of people would argue that the supermarket is one of our greatest achievements. However, there’s a far more convenient way to feed ourselves and our families with real food. And all you need is a little bit of local knowledge.

Local Harvest is a new website about good food that’s close to you.

It’s a simple idea. You enter your postcode, and Local Harvest shows you where to find the best produce closest to you. It might be a local vegie box system, or a community garden, or a farmer’s market.

Unlike the conventional tomato from the supermarket, this tomato was picked when it was ready to be picked. About 24 hours ago.

The farmer that picked it got most of the profits. And it didn’t have to sit in cold storage for extended periods, because it came from a farm close by.

So this tomato is locally grown, it’s fresh, full of nutrients and it keeps the profits local.

‘Several studies analysing the financial impact of Farmers Markets in local communities have estimated that for every dollar spent at a Farmers Market, $2 to $3 is returned to the community through a multiplier effect (Bullock 2002; Coster 2004; Guthrie et al 2006).’  (source)

In Australia we’re really lucky because we have good quality food close by.

With every meal, we have the opportunity to support a different kind of food  system – one that produces vibrant, healthy food with the wellbeing of people, animals and the land at heart.

And that’s what Local Harvest is about. It’s not a gimmick or a diet and there are no prizes. We’re about reclaiming our food choices and narrowing the degrees of separation between our food and us.

So, go to Local Harvest, type in your postcode and practice the art of eating locally, supporting local and organic farmers and businesses, and rediscover the life in your food.

Because food is life, and every dollar we spend is a vote for the type of food system we want.

More on Tomato production in Australia

Tomatoes are the second highest value annual crop after potatoes.

Tomatoes can be cultivated under cover in greenhouses or outside in orchards and can be consumed fresh, canned or used to produce sauces, juices, pastes or powder.

The tomato industry in Australia can be separated into two distinct sectors, those grown for use in processed foods and those grown for the fresh market.  Victoria is the major producer for the processed market accounting for 86% of total production followed by New South Wales at 12% and small amounts in the other states.  Queensland on the other hand produces the majority of tomatoes for the fresh market accounting for 55% while Victoria, New South Walesand Western Australia produced 20%, 12% and 5% respectively.

In 2005, less than 32 specialised processing tomato growers provided 99 % of the crop. Three factories process the bulk of the production. Two of these factories focus on tomato paste and derivative products and one specialises in peeled tomato products.

Coca Cola Amatil – parent company of SPC Ardmona, announced in August 2011 that it will close the Mooroopna manufacturing plant, which mainly produces canned tomatoes and tomato paste, with production of packaged fruit and vegetables consolidated at its Shepparton and Kyabram factories. (source)

The Costa Group –  one of the country’s largest distributors of fresh fruit and vegetables, has built, at a cost of $65 Million, Australia’s largest glasshouse tomato farm known as Blush Tomatoes. It is located at Guyra, near Armidale in northern NSW.  (source)

d’VineRipe – in a joint-venture with Victor Smorgon Group and Perfection Freshhave a $30 million high-tech tomato glasshouse operation Spanning 17 hectares at Two Wells about 40km north of Adelaide in South Australia.

SP Exports – based in Childers, Queensland, grows a third of all fresh tomatoes eaten in Australia, sold mainly through Coles and Woolworths supermarkets. In March 2012, went into voluntary administration owing $31 million. Has heightened fears that it is becoming near-impossible for any local vegetable grower, regardless of size or skill, to turn a profit in an era of ever-smaller margins and a price war between the two supermarket giants.  (source)

Kagome Foods Australia – Japanese food manufacturer, Kagome, bought the processing plant in Echuca in 2010, previously owned by Cedenco (source). Now Australia’s largest tomato processor, with around 200,000 tonnes of tomatoes processed each year in Victoria’s Goulburn Valley. It grows and harvests its own tomatoes and supplies a number of major domestic and international companies. In Jan 2014, the Victorian Government announced it will contribute to  Kagome’s $21 million expansion plans  (source).

More on the journey of an industrial tomato

It takes a tough tomato to stand up to the indignity of such industrial scale farming, so most Florida tomatoes are bred for hardness, picked when still firm and green (the merest trace of pink is taboo), and artificially gassed with ethylene in warehouses until they acquire the rosy red skin tones of a ripe tomato…..Of all the fruits and vegetables we eat, none suffers at the hands of factory farming more than a tomato grown in the wintertime fields of Florida…..Perhaps our taste buds are trying to send us a message. Today’s industrial tomatoes are as bereft of nutrition as they are of flavor. According to analyses conducted by the U.S. Department of Agriculture, fresh tomatoes today have 30 percent less vitamin C, 30 percent less thiamin, 19 percent less niacin, and 62 percent less calcium than they did in the 1960s. But the modern tomato does shame its 1960s counterpart in one area: It contains fourteen times as much sodium. (from Tomatoland: How Modern Industrial Agriculture Destroyed Our Most Alluring Fruit)

‘Frugavore’ – ‘a love of all things frugal’ was coined by Arabella Forge in her quest to lead a healthier, less wasteful and more cost-saving existence.

Arabella is a Melbourne-based nutritionist and dietician. She teaches cooking classes with an emphasis on traditional techniques at CERES Environmental Park and Organic Wholefoods in Melbourne. 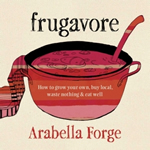 By living and cooking as a frugavore, you can learn to utilise the best quality foods, but waste nothing as you go. This means that money can be saved on groceries – not by buying cheaper produce, but by using better quality, local produce more wisely, and connecting directly to the source of our food and preparing items from scratch.