We began our day with some french toast (Keans eggs, milk, Andrews bread), topped with Janet’s apricot jam made from apricots we collected from Dan our neigbour’s tree – it’s where our bees seem to swarm to. 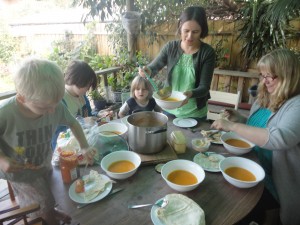 Lunch . We’ve guests. Amanda and the kids have come over for a play and so it’s time for a big pot of soup. I harvested the rest of the carrots from the front yard. Most of them have gone to seed but did grab some beauties. Luckily our weekly vegie box came with some more carrots. They’re from Forest Hill organic farm in Tassie (465kms). Pumpkin’s from Griffith (461kms) and onions from Breakwater (71kms).

Amanda bought some great Lebanese Pita bread from Country Bread Kitchen, Camberfield (23kms); a tub of Monjay Mezza Hommus from Granville in NSW (861kms) – labelled ‘made in Australia from local and imported ingredients’. 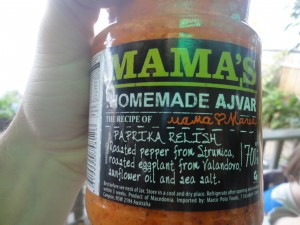 And the ultimate wild card from the Polish Deli -Mama’s homemade Ajvar, a mild salsa-like dip, journeying to us from Macedonia! (that’s about 15,000kms)  … the twist here however is that the label has specifics of where individual ingredients are from – ‘roasted pepper from Stunica’, ‘roasted eggplant from Yalandoro’. A awesome example of best practice transparency… and a especially excellent choice if you live in Greece. 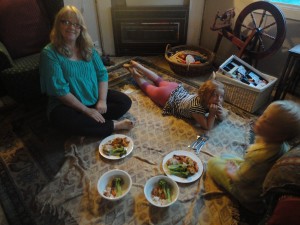 Dinner. Another very, very tasty meal. This time we picnic-ed as a family on a rug in from of Grand Designs on the Telly. The kids think Kevin is their uncle. Our chicken was free-range ‘Bannockburn‘, from Turi foods in Thomastown (30kms), FREPA certified. From the website…

“Our chickens begin their life in Bannockburn, a small rural town in Victoria about 22km northwest of Geelong, Here our chickens are bred and hatched before they are transferred to rearing farms …

“Turi Foods has sixty-four contract broiler growers and one company owned farm spreading from Drouin and Geelong in the east to Winchelsea, West Gippsland and the Mornington Peninsula. ” (not sure specifically where their free-range chickens are) 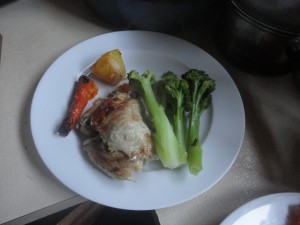 “Our free range farms are specifically designed according to the strict Free Range Farming standards. Birds are given access to outside paddocks during the day and are returned to their large barns at night to protect them from predators and the elements. Typically free range farms have fewer chickens per square metre of shedding than commercially grown chickens. Outside paddocks contain large areas of grass for chickens to scratch and peck, as well as bales of hay and other items which are strategically placed in order to replicate a chicken’s natural environment.”

Turi also do non-free-range through the La Ionica brand. More on the pros and cons of Turi in last year’s blog here.

Also with the meal was our pumpkin (bath), broccoli from Werribee (25kms), and potato  from Casuarina Biodynamics in Wurdi Buloc (105kms). Read more about Adrian Wojtowicz and Kirsten Alford – the folk behind the Casuarina farm- here.

And a final thought for the day…

Part of the Local Harvest Challenge is a attempt to rediscover our sense of place in the world. This year I decided to take on my very own personal challenge for the whole year – I’ve called it the ‘Year of living locally’ (like Mel Gibson’s ‘Year of living dangerously’). This is simply being quite intentional and mindful about my place in the world, trying to identify it (name it), and care for it. It has involves simple things like:

I mention these things because if we take re-localisation seriously, it is more than just the things we do that will be changed. Our whole approach to the world is transformed. We think differently. I’m hoping that this year I can foster such a change.