Today was the pinnacle of the challenge – our Local Harvest Challenge Community Brunch. I’d call it a pot-luck meal but there’s no luck involved, and it’s more like a ‘Celebration Feast!’ 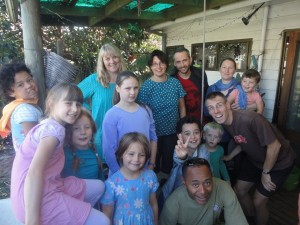 We had Jackie and Fiona (both LHC bloggers) and Julie (a school parent friend) and their families, adding up to 14 people including us. As expected everyone was quite intentional about what they brought along.

Fiona’s brought pizza – tomato’s from the Vic market, Powlett Hill flour, Silverbeet and eggplant from their garden, onions from CERES in Brunswick, and Organic Dairy Farmer’s Mozerella Cheese (Victorian). And Quinces in Honey  – Quince from parent’s tree in Blackburn and honey from the Otway region. plus yoghurt – homemade with Demeter milk, using Timbbon yoghurt as starter. 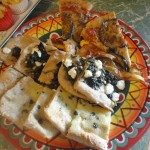 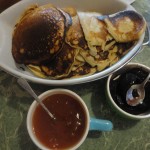 Tea – Daintree black tea for those going beyond Vic. Sun Gold Milk from Warnambool (I was really excited that I paid just 50 cents for 600m carton. We usually pay $3 a litre for organic milk. Now however, realising that this is less than $1 per litre, I wonder if farmers are getting paid enough here?). Peppiment tea – front year planter box peppiment (Okms).

Good conversation, some Ukelele-ing, and the recognition we’re in it together!

The afternoon saw us travel up to Buxton where they’ll be a big Leslie family reunion tomorrow.  Managing meals are always interesting away from home, but we’ve done well. 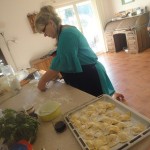 Dinner involved making ravioli (flour and egg), with ricotta and herb filling. This ricotta was made when I accidently used the wrong culture in making yogurt. It was cheese culture. So I boiled up the failed yogurt, added vinegar and when it separated, took the ricotta off the top. Love it when you can turn a failure into a big win.

With our pasta went tomatos. These had been bottled by Janet. We got about 40kgs of tomatoes this year from our garden in Footscray. Don’t know why it went so well but it’s meant we’ve now got bottled tomatos, pasta sauce, tomato sauce, and pizza base.

The other part of our meal was Buxton Salmon from the Salmon and Trout farm just down the road. Unfortunately it’s not salmon season so it was frozen fish but from the farm. Peas and potatoes from I-really-don’t-know-where.

Apple pie made from apples off Janet’s folk’s tree, here in Buxton. And yes, we do know the guy who picked the fruit.

I haven’t mentioned nashi’s and cider yet. Last year my dad and I picked a whole trailer load of apples and nashi’s from a friend’s orchard in Beaconsfield. This year we did it again and Janet and I spent a good week bottling, crushing and juicing these fruit.

I experimented with a press made from a car jack. Nashi Juice is exquisite but our real goal (and joy) has been brewing up cider. We’ve had mixed responses from people as to whether you actually can get good cider from Nashi’s. Last year’s mix (mentioned here) became vinegar – which we’ve used in mayonnaise (good but not great). 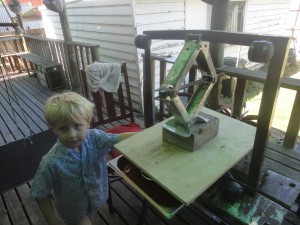 This year we’re trying again and have a bunch of different brews on the go. Janet has gone with the modern method using purchased yeast and mega-sterilising of bottles, etc. I’ve gone with the ‘early settler’s’ recipe from a book I got from Sovereign Hill called ‘Household Lore’. The recipe is so basic  – which is the reason I love it. Cut apples into small chunks, cover with water and sit for 10 days to ferment and bubble. Drain liquid from apples, and stir into liquid 1 cup of sugar (for 6 pints … approx 3 lts), discard apples. Bottle, let sit, uncorked but covered, for another 14 days. I then corked them (using wine corks) and now need to wait 3 months before tasting. Made a second batch using honey in there and some figs too. Janet’s used a capping machine to seal hers. There’s been lots of bubbling in our house of late. Ps. We have a new appreciation of our beer-drinking neighbours who have kindly donated bottles via their recycling bin.