Here at last, the challenge week is upon us. Hot on the heels of Easter with a good dose of chocolate from afar and very anonymous hot-cross buns  (we had hoped to make them again this year but didn’t quite get there).  This blog is a bit of an excuse to share a whole lot of the things we’ve been up to.  Apologies if it reads like a ‘brag book’ but we’re really excited that there’s so many things that seems to have come a lot more easily this year than in previous years. 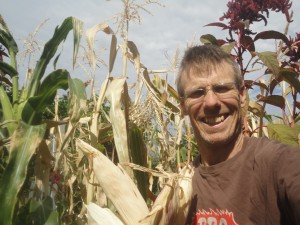 Our goals for the week are to take ‘eating locally’ to another level –  so getting the degrees of seperation’ from our food even less –  and also finding out the specifics of the story about the food we do eat but don’t know enough about. So, like last year,  we’re not being too fanatical about the goals we’ve set, but rather seeing it all as an opportunity for learning.

I’m happy to say more food than before will come from our garden, much prepared by us from local sources, and also from our WOC coop box which has been the backbone of our ‘good fruit and veg’ for over 10 years now.

Likely once again that we won’t get to do much of ‘meeting the farmer’, but I will try to paint the picture of the people behind the food as I discover them.

Janet is a viz at pancakes so what better way to start the week. 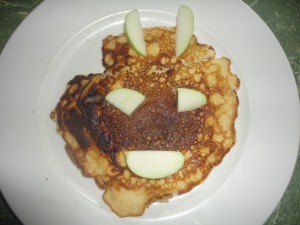 Flour  >   We have a ‘dry goods day’ once a quarter through our coop. The bulk staples (flour, sugar, rice, etc) come via wholesaler Biodynamic marketing, direct from the Melbourne metro market. This particular flour comes from Edwards farm.  I found out that there is an Edwards Farm in Murrayville, 536km from Melbourne, almost right on the SA border. They’re certified biodynamic and do barley, rye, wheat, and cereal grains. Worth noting that there is also an Edwards farm with organic certification in Carabooda, just north of Perth. They do avocados. I’m assuming it’s the first.

Eggs  >  These  should have been from our chooks, but of course they happen to be laying rather infrequently this week. So when realising the local grocery was closed,  I ventured to the local IGA and got 2 dozen of the best on offer. I was looking for egg producers that are ‘exclusively free-range’, small and as local as  possible. The first was Hanging Rock Hens free range eggs, which would make it about 74kms from us in Footscray. The carton reads “Free Range Guarantee –  No Cages”. No website for more specific information. $6.25 per doz.

The second was Keans. Kean’s free range egg farm is based just outside Bendigo within the Whipstick forest, (164kms). Kean’s is a 3rd generation family owned and run farm. There was a bunch of information on the carton and their website  “All our Hens are able to roam free instead of being cooped up in cages enjoying fresh air and sunshine.” $4.75 per doz.  Looking for free-range eggs is always tricky, as standards are voluntary. See some of the complexities here and the many positive alternatives here.

Butter  >  Proud to say, made today from non-homoginised milk (ie had cream on top) which with a good bit of whipping with the hand-beater formed itself into a spreadable and delicious salty treat!

Milk  > For this week it’s the Demeter, biodynamic brand. Janet has had a little to do with one of the farms that supplies this milk up in Nathalia, near Echuca (~ 230 kms). See post about the Peterson’s farm from last year. There are many great non-homoginised milk options including Elgaar Farm, Ashgrove dairies, Paris Creek, and Barambah. See more here. 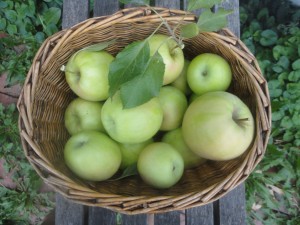 We were also treated to Talitha’s cordial. Talitha is 7 and enjoyed creating her own brew of citrisy refreshment. Think lots of local lemon (including rine) and lots and lots of less-local sugar. Very – ahh – refreshing.

Also refreshing was Janet’s morning coffee which was justified because it was roasted by our friend Ben, who roasts beans in his West Footscray flat, and the Mexican ‘El Triunfo’ beans are shade grown, organic, fair traded and bird-friendly. And oh-so tasty.

The highlight of this meal for me however was our apple. We’ve had the tree for 10 years – it was a wedding gift – and this year is the first time we’ve got a decent crop. 14 beauties! More on our apples later…

What shape are you in?

We had some of Talitha’s friend visit for a holiday play and they bought Savory Shapes to share. We thought we’d let them through to the keeper, but not without a look at where they’re from. ‘Made in Australia’ is on the pack, but with a little investigating I found Arnott’s have 3 bakeries where biscuits are produced : Marleston in South Australia, Huntingwood in New South Wales, and Virginia in Queensland. These are likely to be from the Queensland site.

Of course as with most processed foods, where the ingredients are actually from is all a little more vague and mysterious. Best I could find was that Arnott’s source: 90,000 tonnes of flour and grains from areas including the Darling Downs, Moree, Riverina, South Australia and Western Australia. 16,000 tonnes of sugar from far North Queensland; 3,500 tonnes of dairy products from Victoria; and 4,000 tonnes of canola oil sourced from canola crops in Western New South Wales. Hmm.. possibly these small biscuits could be well travelled …

Also worth noting, Arnott’s is a division of Campbell’s Soup Company, an American company. They have a 60% market share of biscuits in Australia. So together with the unnecessary packaging and dubious flavour enhancer E635, I think we can do better… as you’ll find we did with lunch! 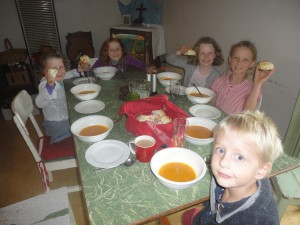 Lunch was Soup  – made from our carrots, pumpkin via our weekly WOC coop box and from Karra Organic Farm in Palinyewah – about 100km north of Mildura (~650 total) , and Pink Lake salt from Dimboola near Horsham (326 kms). Plus very delicious Scones made from flour (356km), oil (Mt Zero Oilve farm – 286kms) and egg (74kms). Our butter from Peterson milk (~230km).

Some preparation for dinner included creation of dessert –  poached quiches (picked from Beaconsfield last year and bottled) and custard (eggs yolks, milk, and the more distant extras… sugar, cornflour and vanilla). And then Janet and the kids had to use up the egg white… and so a bunch of merangs appeared.

Plus my amazing flat bread… a discovery worth shouting about. But enough for now, more on that tomorrow….