We had our usual breakfast this morning of homemade sourdough and homemade marmalade. Later in the morning my thoughts turned to lunch and the leftover pasta I had made which was in the fridge. I decided to make a soup and cut the pasta up and add it in as a kind of noodle. The soup consisted of Massell vegetable stock, Ceres Fair Food (CFF) onion and potato and homegrown carrots, broccoli, kale and parsley. I was actually quite surprised at the food I found in the garden. The carrots had been harvested earlier in the summer and are stored in the bottom of my fridge. Everyone enjoyed the soup especially the homemade noodles and we ate it with homemade sourdough bread. My husband and I then had a sneaky Oxfam coffee which according to the packet could have come from anywhere on planet Earth where coffee beans are grown. The children snacked in the afternoon on our homegrown Fuji apples.

Our four-year-old tree produced an amazing crop this summer there in the front garden. Later dinner had to be planned and I felt a little desperate and wasn’t really sure what I would feed everyone. When I feel like this I always start with a plan for pudding and work back from there. So, a simple upside down pudding was in order and I added in apricots that I bottled last year. They were grown either here in Albion or in Footscray, I am not sure which garden they came from. We bought Pura cream from the local milk bar to have with pudding. Next I made cornbread using Australian grown polenta, Bega cheese, Ben Furney flour, Schulz milk and eggs from our chickens. I no longer have the packet for the polenta so can’t say who packaged it but it was definitely “Product of Australia”. 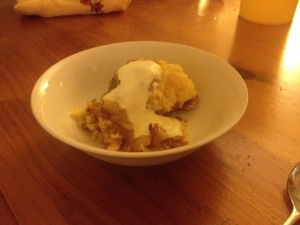 Pudding and corn bread in the oven meant I still had to come up with something else so I turned to my fail safe meal of desperation: frittata. A quick wander out in the garden revealed some tasty strawberries (did not make it inside), sweet basil, silverbeet and miraculously two zucchini! Back inside to fry up some CFF onion and potatoes, and the veggies brought in from the garden. Added it all to the remaining Doreen eggs, stirred in some Pura cream and topped with some Bega cheese, gentle stove-top cook and finish under the grill. Out onto the table and great timing for the next day’s sourdough loaves waiting to be cooked as the oven was nice and hot. My children stuffed themselves so much with cornbread that there was pudding left over so guess who had seconds later that night?