Fiona Kerr: Off and running- Day one.

Well I am doing this challenge to live more like I want to live, not to give stuff up, but for this week, I know no Victorian sources of tea or coffee, so I will have to change my hot drink selection to Lemongrass and Mint tea from the garden.  So with great ceremony, had my last cup of tea about 11pm last night. 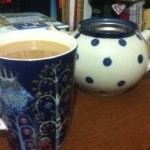 Today and the challenge began with eggs and toast all round.  The eggs are from our girls, the bread was left over, and though we’ll try and make our own using local flour this week, the bread we had was yummy sourdough from the local bakery, seemed a shame to waste it!  H decorated her egg before eating it: 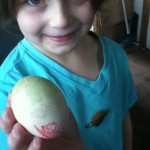 Last night I had started some yoghurt, so now was the time to check how it had turned out.  Maybe the Timboon milk and yoghurt, maybe the awesome yellow thermos inherited from my Nain, but it was good! Quickly added a side of yoghurt to eating plans for the day, starting with lunch.  The bread had run out and the flour not yet arrived, so lunch was potato, corn and leek rosti with yoghurt, cucumber and dill from the garden on the side.

During the afternoon I did some weeding in the garden, and moved the chooks on to the tomato bed to clear out the bugs and have a good scratch around, so I can plant some more seedlings next week.  Collected some windfall apples (more on those later), and some rhubarb.

So finally it’s dinner time and I decide to make a vegie soup with Persian Red Lentils from Mt Zero, but it has a mind of it’s own, and it decides to turn into lentil stew.  It was alright.  Followed up with the rhubarb and apples, stewed with some honey.  The challenge is running and it tastes good! 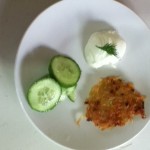 In order to avoid riots, I decided to grant a wildcard to Easter Chocolate.  Large quantities were obtained yesterday, some in the form of my sister’s famous and irresistible brownies, which really wouldn’t be at their best after a  whole week. Another wildcard is for some ginger for medicinal purposes, as Matt has been laid low with a raging sore throat. Finally, I’m not sure whether tofu needs a wildcard or not. We usually get it from the ex-milkbar, now tofu factory around the corner from us.  It is the locallest of local- and no packaging, but of course the beans they use don’t come from Vic. Anyway, we will be eating it this week.

Used local honey instead of sugar

All food grown and made in Victoria

Harvested and ate food from our garden.