Breakfast today was eggs on toast again.  But even before breakfast I’d had an answer to my question about yesterday’s Haloumi.  It was Wattle Valley Haloumi, made by Menora foods, (who have a very efficient customer service department), and it is manufactured in Albury, from milk from nearby Corowa.  They also let me know their cheddar is made in Victoria and so are their dips although the dips use ingredients from all over Australia and overseas.   So the Haloumi was made a lot closer to home than Cyprus, but not quite in our own state!

After breakfast, flushed with my success, I decided to call True Organic/ Organic Dairy Farmers to check where the cheddar and mozzarella we had in the fridge were from.  I’d assumed they were Victorian and their address on the packet is.  A quick phone call confirmed it, phew!

Usually we buy Watsonia cheddar, but unfortunately earlier cheesy investigations had found Watsonia cheddar is made nowhere near Watsonia in Victoria, in fact in Western Australia.   It does put my head into a bit of a spin, trying to figure out whether the small plastic wrapped Victorian cheese is better than the Western Australian one without plastic.  Probably better to find a third way.

Well, that’s a dilemma for next week.  First, to dinner.  Normally, pasta is a bit of a staple for us, but that is pasta wrapped in plastic, usually from the supermarket.  For tonight, it’s going to be homemade with local flour and eggs. 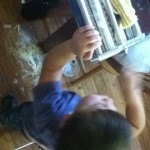 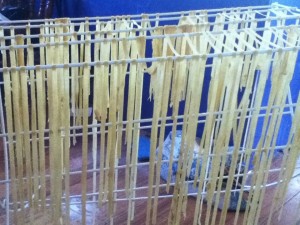 When the pasta was made, I served it up with zucchini, basil and the last few tomatoes from the garden, local leeks and garlic, and some Meredith goat’s cheese. Very tasty!

Dessert was more of the quinces, stewed up with Otways honey, and more homemade yoghurt. 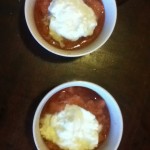