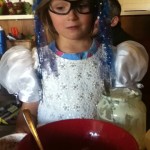 Dressed for the occasion

Today started with the best meal of the day, brunch, with some of the best people.  Nick and Janet had invited us to their house along with other friends and challengers.  A glorious feast was had and some raided the incredible dress up box of our hosts to find suitable attire for the occasion.

The table was spread with with delicious pancakes and muffins both sweet and savory.  The butter was homemade with local milk, the sweet muffins starred home grown apples and the savory were flavored with home made fetta and home grown home dried tomatoes.  Janet and Nick live the local harvest all year, and of course, everything tasted awesome!   We had brought some pizza made with silver beet and eggplant and herbs from the garden, Victorian cheese, tomatoes and flour, and for dessert, more honey poached quince and home made yoghurt. Julie had brought apples stewed with vanilla and cinnamon. Yes, I can hear you asking where they might have been grown, and it wasn’t exactly close, in Bali, but they had been given as a gift from someone who had bought them directly at the farm gate, so that kinda counts, I reckon.  Finally, the meal was rounded   off with some Victorian Gouda and bikkies contributed by Jackie.  Oh yeah, and I had a cup of tea, or two.  It was Australian tea of course, but not exactly Victorian. 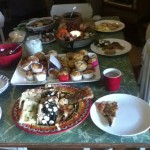 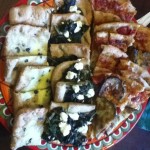 After brunch, who needs lunch? Bulldogs supporters headed off to the footy with some little rolls and apples. (and what else may be eaten at the footy, stays at the footy!)

I did some shopping for next week and bought some organic peaches, because while there is stone fruit around, I think it is our duty to eat it, and  the challenge ends tomorrow, so origin becomes slightly less pressing.   But anyway I asked where they came from and the lovely shop owner went into the cool room to find the box for me.  South Australia was the eventual answer, so we’ll have to wait for Monday.  Vegie shopping was interesting too, in that things that last week at CERES were from Vic (like celery and spuds), this week came from other climes, while carrots, out of staters at CERES, were locals today.

And so to dinner.  We have a few challenges remaining, one being to make our own ice cream.  Making it without sugar was putting me off, but you can google anything, and pretty soon I had a recipe for honey ice-cream. (A slightly bossy recipe, but I can tell you that if you break the rules and don’t, in fact purchase a candy thermometer at Wal-mart, it does still work!) Vanilla was still a sticking point, but a sudden brainwave hit me. Lavender!  You can make Lavender scones, so why not lavender ice-cream?  It turned out rich, creamy and quite intensely flavored, mainly from the honey.  May not replace vanilla in the repertoire, but definitely worth eating.  First course was corn fritters (with the left over egg whites) and salad. 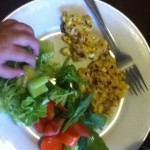 ice cream (with quince, of course!)

And finally some evidence we might be getting a little too into the challenge: This morning when I was kneading the bread I noticed some metal staples on the table.  “Where did those staples come from?” I blustered.  “It doesn’t matter if it’s not Victoria mum, we’re not eating them”, replied H!