So – the most important man in my life – after significant family members such as my husband and dad – is my green grocer.

I first got to know him when I was one of the vegie buyers at the wholesale Metro Market for our local co-op 20 years ago. The Metro Market, just next to the docks was a place like no other – with all sorts of rumours of dark intrigue, deals done and rapidly backward accelerating forklifts, trolleys and trucks.  I would be choosing our produce at the two organic stalls that I knew and felt secure and safe in.  In the dark hours of the winter mornings, amongst the overwhelming acres of sellers, darting through the lanes, dodging the manic forklift drivers, I would spot my Green Grocer doing his daily pick-ups for his shop.  He would make his way through the masses like a gallant knight.  Later I would ask him what he had found.  His answer would be -“Oh, Janet – I knew that the garlic seller from Tellimbuc South would be here and this was his last week before he left for the year.  He always has great produce – and I like to support him because he is a small farm.” For my Green Grocer – it is about quality produce, right price – and most importantly – the relationships with the growers and sellers.  This is also reflected in the way he runs his shop in a small village in the Inner West of Melbourne.  It is a hub of connection.  A place where people are on first name basis and you can pick up great information about good surfing spots, live music gigs, political discourse and of course, the nicest, fresh produce.

It has been some years since I did the co-op run, and I have moved house a couple of suburbs north.  I mourn the loss of the local – his Green Grocer is now an intentional destination shop.

Recently I found myself in the area and decided to once again do my big weekly shop with my Green Grocer.  It has been some months since I had been. 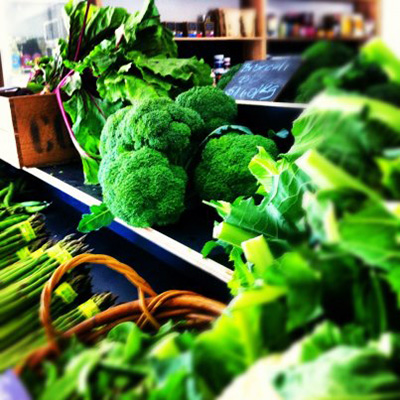 I watched the ‘new’ ways of doing things – of verbally placing your order at the door and the lovely guys going and filling my boxes with perfect fruit and veg.   I love the way I could say – ” enough broccoli for three meals” or ‘two handfuls of beans’ or ‘you choose the nicest mandarins for me’.  Other smart regulars had emailed or handwritten orders and were picking up their boxes.  Others were having their boxes delivered.  People were waiting in a short line – chatting with those they know, or just having friendly conversations with those they didn’t.
While I was waiting, my Green Grocer came to me and said, “Janet – try these pears’ and handed one to my son and I.  They were sweet and crisp and juicy.  My 11yr son lives on apples – up to 6 a day.  I looked at him and said, ‘This week – pears!’  He agreed.  The Green Grocer said, ‘The grower was having his last week, and I felt sorry for him and so I bought the last of his stock.  Mistake – I have run out of cold storage -you’d be doing me a favour if you took some.’   Needless to say, we left with a 15kg box and lived like royalty for the week.

Over the years, he has been my faithful go-to guy when doing my preserving.  He knows that I don’t mind fruit with blemishes – brown marks of peaches are no problem.  He will let me know which week the best saucing tomatoes are coming in – both quality and low price – saying to hold off for another couple of weeks, or even sometimes finding a good buy and passing them on to me (much like the pears).  He is a weather vane of produce – what is local, what is in season and who has grown the food.

I live very close to a ‘market fresh’ green grocer in a large shopping centre.  I am one of the masses in this store – a nameless face. It is easy to walk the 200m to pop in and get what I need throughout the week.  But it is dull speck on the gravelly road when compared to the precious jewel of my Green Grocers two suburbs away.

My new routine for our food sourcing now includes the journey to the little whole foods store in the next suburb, which is just a few moments away from “Hello Janet – I found these potatoes – they are a new breed and I was wondering……..”