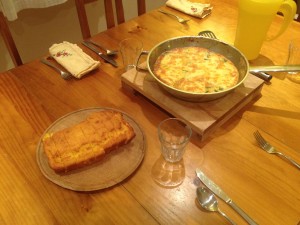 Breakfast this morning was my toasted sourdough (two crusts found in the cupboard to be honest) and, since we were out of eggs, egg free pancakes. After a long time using sifted biodynamic flour I am loving the glutenous nature of 00 flour for home baking. The pancakes were delicious and served with home made brown sugar syrup and fruit bought through Ceres Fair Food (CFF). The milk used in the pancakes is from Schulz Organic Dairy in Timboon, VIC. This is the milk we usually have in the house. My phone’s calendar alert reminded me I had a friend and her three children coming for lunch today which meant cooking for nine. I had a moment of mild panic when I realised we had no bread (can’t do sourdough on Sundays at present) and pretty much no local food in the house and the tomato plants had all been cleaned out the night before. Plus pleasing six children at lunchtime was going to be tricky. Thankfully an idea occurred to me which was to feed them all pumpkin soup. I didn’t have any pumpkins but decided to go to Sunshine Bigfields and buy some along with some bread from the Turkish Bread Factory in Campbellfield, VIC. 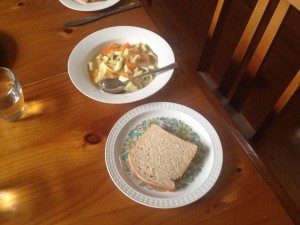 It took me a bit of asking and explaining but the guys at Bigfields eventually told me the pumpkins in the store came from Griffith in NSW. I was in a jam by this stage so decided to go with the NSW produce but noted later when I looked up Griffith, NSW on Google maps that it appears the same distance from Melbourne as Mildura, VIC. This made me feel better. I also bought Floridia ricotta at the Bigfields Deli, which the lovely ladies behind the counter told me is made in Thomastown, VIC, and the free range eggs I bought at Bigfields came from Doreen, not too far out of Melbourne. Once home I made the pumpkin soup using onions bought from CFF and two of the pumpkins. I could not resist adding ground cumin and cloves to the soup as well as Massell veggie stock which since it’s not in its original tin I can’t really say if it was a product of Australia.

My friend bought potato salad to share for lunch and was mightily embarrassed when her 8-year-old daughter announced proudly that her dad had made the salad for us that morning before he left for work. The pumpkin soup went down a treat which was just as well because we later ate it for dinner. We had a CFF rock melon in the afternoon which was very tasty. With our soupy dinner we each had a roll bought from our local milk bar and baked by Sunny Nguyen in Footscray.