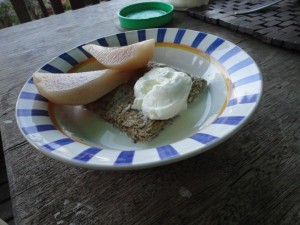 Simple breakfast. House owner and real-estate repair people coming so need to be trim and terrific. No excessive cooked breakfast today. Pears, yoghurt, almonds, sultanas, and weetbix for the kids. All good but weetbix which is almost impossible to trace.   Sanitarium have manufacturing in Berkeley Vale, NSW….. but who know where the wheat comes from. They are however organic.

This morning we had Demeter milk. It’s the biodynamic brand, using a method of  organic farming that emphasises the connections between the soil, plants and animals as a self-sustaining system. Janet was excited because, while on a preserving workshops last weekend, she spent some time at the Petersons family farm and met the people who supply this milk. She’s a dairy farmer’s daughter so knows her cows and liked what she saw. Here’s some background from a Richard Cornish Epicure article from 2009. 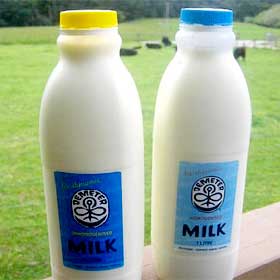 Nathalia farmers Mark and Lyn Peterson … teamed up with BioDynamic Marketing Company and now receive about 70 cents a litre for their milk, producing just 1100 litres a week. (Most conventional farmers are locked into contracts of between 25 cents and 50 cents a litre.)

Lyn Peterson says price was not what motivated them to set up the label. “We wanted to make sure there was a high-quality milk on the market that tastes as close as it can to natural milk. It’s handled very gently, only travelling 40 kilometres before it’s pasteurised, and it’s not standardised, so at present the milk on the shelf is around 5.3 per cent fat. I think you can taste the difference.”

The BioDynamic Marketing Company’s Craig Holloway says: “The retailers are telling me that the customers who are conscious of quality in taste, health and animal ethics are relearning how good the simple things are, such as milk, which is such a day-to-day thing. There is an understanding developing with certain parts of the community that quality milk comes from good pasture and well-treated cows.”

The farm is in Nathalia, near Echuca, about 230 kms fromMelbourne.

To the swimming pool and back, refreshed but hungry. So lunch of cheese and tomato toasties (from Warnambool 260kms , and Merrigum 160kms respectively). 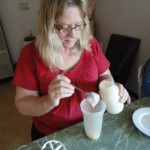 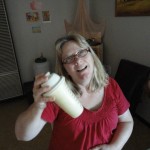 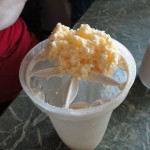 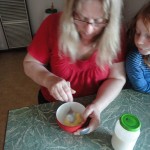 While muching, Janet got out the cream (Demeter, Nathalia 220kms) and the shaker and we proceeded to make ‘butter’. I’ve tried it before and it seems to take ages, but this time seemed like no time before it was chok, chok, choking away and we had a solid from a liquid. You then drain the butter milk off (to use later for pancakes) and then rinse, mix in salt and spread where desired! 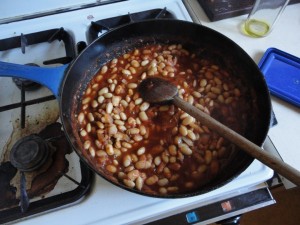 Inspired by this instantaneous home-production, I value-added to the beans I had soaking and wiped up some baked beans. I’d tried these before too but no luck with the kids (they like the sweet tinned ones). But this time we might have a winner with bottled tomatoes, onion (AraHura, Nyah West 370kms) honey (our bees), navy beans (from FOE, grower not known), plus the mustard powder (?) and balsamic vinegar (Italy15,960kms). We’ll do the taste test tomorrow.

Dinner. Roast Chicken and veg. We had the chicken on hand and although not the first choice, it’s not the worst one either. It’s a La Ionica which is “processed chemical free”. This means simply that they don’t use chlorine to wash the chicken with, which is common practice in the industry. Here’s some information from their website – an uncommon but welcome degree of transparency. 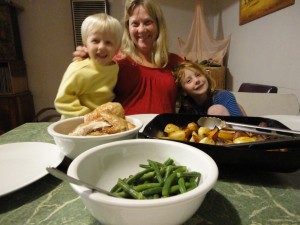 La Ionica are owned and operated by Turi Foods, who also own Golden Farms brand (who supply supermarkets, KFC, Red Rooster and Nandos) and Bannockburn brand.  Turi Foods have their own feed mill, located in North Melbourne, and nine breeder farms of which eight are located in Bannockburn and Anakie. They have has sixty-four contract broiler growers and one company owned farm, all inVictoria. La Ionica chickens are processed in Thomastown.

What wasn’t mentioned was that in January this year La Ionica was fined by the ACCC for misleading and deceptive conduct over descriptions of birds raised in its barns as “free to roam”. (Steggles was also pulled up on similar claims but has refused to pay the fines and remove labels). These are not free range, which would have been a best choice.