Eggs again for the whole family. Hearty cheers all round the breakfast table for my consistency. Kids arked up about olive oil on bread (which I love). Talitha wanted just straight salt on bread – no oil. Janet pointed out that farmers supplying Devondale brand are likely to be located relatively close by. I checked it out and although it’s a Victorian based coop, Murray Goulburn (who own Devondale brand) are made up of dairy farmers from VIC, NSW and SA. They actually supply a third of Australia’s milk. Their 8 processing facilities are however all inVictoria. With kids whining and Devondale butter in the fridge… that’s good enough for me.

Spent the morning at our local ‘hell on earth’ – the Braybrook tip. Every plastic thing I own will one day end up in a hole in the ground like this. Today, I was removing construction rubble from my backyard. My deliberate policy of storing all waste to reuse later in some magically creative way has recently been butted firmly up against my intentional desire of allowing space to breath, have order and seek simplicity. Hmmm… how to be responsible for our impact in our consumer culture, and not implode? 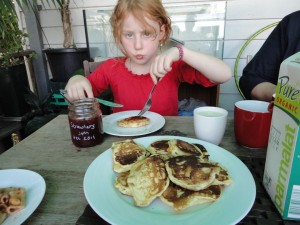 Evening meal was rippa. Slow-roasted purple carrots, beetroot and tomatoes made into delicious soup. All from our WOC coop veggie box. Carrots and beetroots from Forest Hill farm which is actually in Tassie, tomatoes from Merrigum.

Dessert was a bemusing attempt at ‘soy custard’. Using the left over soy pulp from the soy milk made yesterday I added honey (our honey from our roof-top bees), egg, milk, and sultanas (from Robinvale). Devondale cream on top. Some votes of confidence, others not so convinced.