Hey, I’m happy to be here today, at last actually doing the Challenge, instead of talking about it! Apologies that the blogging facility has taken some time to get going. We’re here now.

For our challenge we decided to have a special emphasis on eating from our own garden. 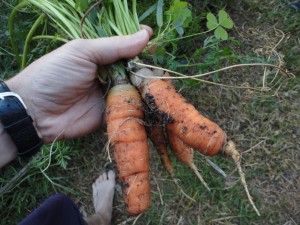 We find that although things come up ready for harvest, we often don’t eat these as frequently as we should because we’ve other options that are (seemingly) more convenient. We’ve always got a whole heap of silverbeet just growing everywhere, and right now, at this time of the year, some amazingly large zucchinis. They should have been eaten long ago. So I’m planning to discover or create some exciting recipes for these ‘common’ and ‘very local’ foods for us. I set the challenge of having at least one main meal each day that centers around a garden vegetable that we have on hand.

The rest of our produce this week we’d like to be from within Victoria. I’m usually quite fastidious and fixated when I set myself a task, but this time we’re going to be a little less strict on this. The whole thing could become a burden when it should be a joy, so there’s likely to be a few things from beyond. I get quite excited just finding out the specifics of where things come from. 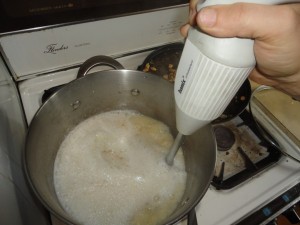 The third thing is making a bunch of essentials. Such as yoghurt, museli bars, baked beans, soft cheese, bread, pasta. Many we’ve done before but fallen out of the habit, with the busy-ness of life.

So today… I’m home alone – Janet has been part of a preserving weekend, and the kids with the grandparents – so I just had to look after myself.

Usually for breakfast we have porridge made from oats, however the oats we get via our food coop dry goods days are from Masons in Kojonup, WA, so I thought I’d go simple and do eggs. Not just any eggs though – ‘daddy’ eggs – as the kids call them. These are poached eggs done straight in water (like in the fancy restaurants). You need a slash of vinegar in the water and then when it’s boiling, swirl the water around into a whirlpool, so when you crack the egg into the middle, it all collects and forms in the centre of the swirling water and then cooks enough to hold its shape. It’s really cool and as you can imagine the kids love to watch. Don’t leave them in too long or they’ll be hard instead of a tad runny. Mmm. 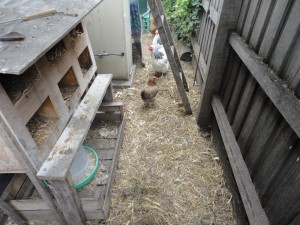 So the Eggs were from our chooks. They have a run down the side of the house. We have 9 but one escapes and lays under the house each day, (stash yet to be found) so in effect we have 8.

This is pretty local but it’s worth noting that the chook food is from NSW. This raises the question as to how far you go with tracking and localising your food choices. For this Challenge we’ll do our best with all levels but really focus on just the first. The really annoying thing about this chook food is actually the bag rather than the kms. It’s the regular plastic woven stockfeed bags, but I’ve found these degrade with time and you end up with plastic over your garden.

So the other elements of breakfast were: 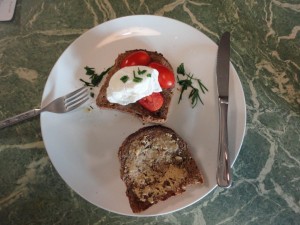 – Vinegar – Apple cider from Mocks, Red Hill 91 kms
– Toast – bread from Andrew’s sourdough, Laverton 15 kms
– Olive oil + salt (instead of butter) – oil from Mt Zero, Grampians – 246 kms
– Tomatoes – backyard
– Peanut butter – .. here’s a bendy-bendy …from Friends of the Earth food coop, Collingwood, actual source of peanuts?, well likely to be from QLD (such as Greenacreas Organics in Kingaroy)… Realised on reflection could make up own almond butter… next time.

A quick burst of morning energy saw some good preparation for the week with me making up a batch of Soy Milk and a batch of Yoghurt. Previously I’ve been purchasing Sanitarium So Good Soy milk. The closest Sanitarium factory is located in Berkeley Vale, NSW. The product is labeled ‘Made in Australia from imported and local ingredients’ which does imply that the beans are likely to be imported – they are second on the ingredients list … unless it’s the filtered water that is imported?! (it’s first on the list) …

So the simple process for making your own soy milk is: soak, strain, boil, wiz, boil, strain, store. Got that? 1. soak the beans overnight; 2. strain the water from them, refill then boil in saucepan; 3. when soft, wiz with bamix; 4. boil again; 5. strain through cheesecloth over sieve; and 6. refrigerate the liquid (milk!). I added salt too.

Yoghurt’s about as complicated. I used Parmalat’s Pure organic milk. The ‘True Organic Dairy Coop’ supply this brand here in Victoria, and almost all farms are from within a 200kms radius of Melbourne. The other ingredient is the culture which we get from Cheese Links in Little River, near Geelong. It’s a 10th of a teaspoon that you mix in. The basic process is heat milk to boil, remove from heat and allow to cool for 30 minutes, sterilize jar (using boiling water) and add milk and mix in culture. Put jar in yoghurt maker container (This is an insulated container that fits the jar, you pour boiling water around it and leave over night).

For dinner we had the kids and the Grandparents. How local’s that! (No, they’re actually very well traveled). What it did mean was that I couldn’t have egg on toast again but had to whip up something impressive. It was a Cheesy Pasta bake with ingredients being: 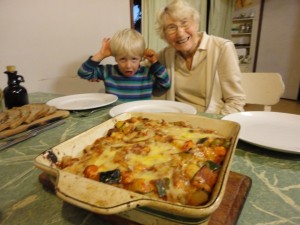 – Zucchini – our garden
– Carrot – our garden
– Spelt pasta – Powlett Hill, Clunes near Ballarat (150kms)
– Cheese – Warnambool
– Beans – from Friends fo the Earth Coop, not sure source but likely Vic.
– Broccoli – from WOC box, not sure source but likely Mornington
– Janet’s tomato pasta sauce – made here at home using our tomatoes and others too (mmm… will find out more)

Ps. ate an orange … without thoroughly scrutinizing it … do not pass go, do not collect $200