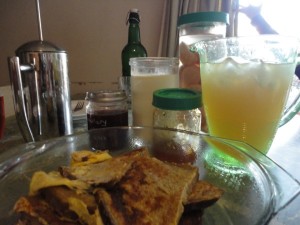 Tremendous morning of radical endeavors… French toast (more eggs but this time disguised as bread!), yoghurt, jam and Janet’s wonderful pears, and a glass of refreshing nashi juice. Does anyone else in the world drink nashi juice? We discovered how good nashi juice is after a big fruit pick at a friend-of-a-friends orchard in Beaconsfield (~44kms). My father and I harvested about 120kgs of fruit including pears, apples and quinces, but mostly nashis! There was much shared family time peeling, coring and bottling. I spent what seemed like a good 2 days juicing up the nashi’s that we didn’t bottle straight. We then bottled the juice in the same way we did the cut fruit (Fowlers-Vacola system).  I recommend it. We’re trialing nashi cider
… but that’s another story.

Lunch was some corn cobs (from our veggie box, via Melba Fresh, not sure of grower) and also left-over soup from yesterday, but the highlight was my ‘discovery snack’. 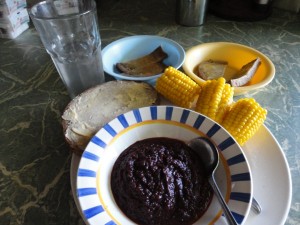 I ground up some almonds (Keens biodynamic, Colignan 410kms) in the coffee grinder and mixed the meal with honey (our bees) and butter (Devondale). Spread on bread… Oh yeah! This is a must for school lunches. Why didn’t I think of this before?

Janet also had coffee which involved some discussion, ending with our justification that East Timor (where it comes from) is a lot closer than Columbia, Uganda or even Papua New Guinea (just). ~2,350kms.

Dinner. You know those lurching monsters in the closet? Well we have them in the front yard – they’re called giant marrows and they used to be little unassuming wee zucchinis before a certain degree of neglect. This is common in our garden –  an embracing of the  evolving wildness. 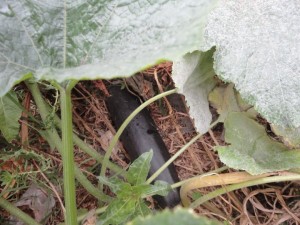 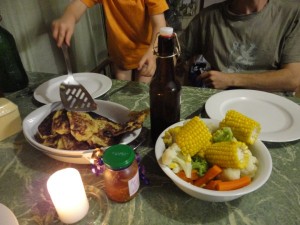 Tonight they found themselves reinvented as Janet’s zucchini & cauliflower fitters (with flour, eggs, onion and salt). I did the silly thing of proudly naming all the meal ingredients before we ate and so the kids of course explained how ‘we don’t eat zucchini’. Should have called them marrow… would have got away with that… Anyway, they were lovely, complete with condiments of Apricot Chili jam, made by one of our neighbours,  and Janet’s tomato sauce, and steamed, corn, broccoli and carrots (carrots from AraHura, Nyah West 370kms).

The kids usually have fish oil tablets after a meal, and we continued with the routine, however I did check the pack. Firstly it’s in a non-recyable plastic bottle (what?) but this bottle has traveled to be with us all the way from Norway, a mere 15,975 kms. Surely the kids can just catch some fish.